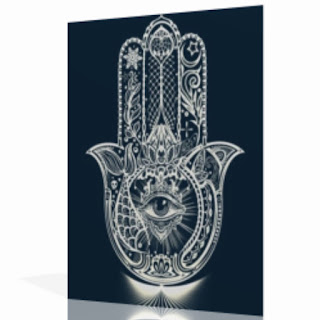 There is a famous parable about the elephant. Several blind people have felt the elephant, and they argue what the elephant should look like. Each asserts his own, because one touched the side, the other - the trunk, the third - the leg.

Since ancient times, this is the situation with religions. People kill each other, believing that only they have true spiritual knowledge.

If different cultures do not see what is common in each other's faith, then there will be no future, or it will be a fantasy nightmare, with total control and closed states, with the hostility of anything different from their people, their religion, their way of life ...

Either one of the radical groups obtains atomic or bacteriological weapons, and everything will become even more terrible.

Therefore, I am glad to discover another parallel place in religions, mythologies, customs of different cultures.

So it was yesterday.

I have found that Muslims and Jews have a sacred symbol of the open palm called Hamsa, or Five.

A common amulet against the evil eye.

In Judaism, this is the Hand of Miriam, the sister of Moses.

In Islam - the Hand of Fatima.

In Indian philosophy, Hamsa is a sacred waterfowl, due to its fatty cover, the feathers of which remain dry, not moistened in water. A person can get such coverage for the soul, with the help of the correct approach to business. Then he is not stained, even in the thick of activities like a lotus leaf, or a water bird in water.

He can be located in the center of the city anthill, and feel the calmness, as in the Himalayan caves.

The divine bird, Hamsa, is a symbol of the soul that dives into matter, but remains uncontaminated.

Great sages are called by this name.

There is meditation with the Hamsa mantra. The bottom line is to form a powerful inhibition in the psyche, as it were, an opposite mental wave dominating over the rest of the waves. Meditation is successful when the Hamsa mantra is heard for the meditator himself, like So Aham - I am one with the Supreme.

There is a legend - if a vessel with water and milk is placed in front of Khamsa, he will drink milk and leave the water. This is how the student should relate to knowledge, strive for the essence, look for commonality between different sources.

I think that all of humanity should do this.